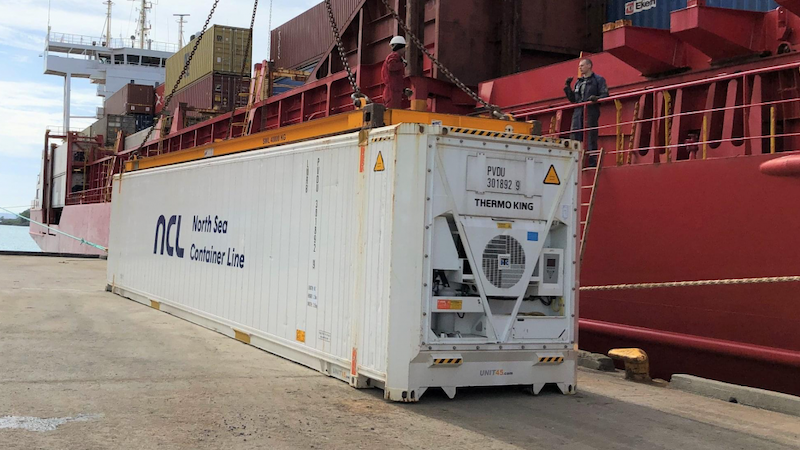 The North Sea Container Line (NCL) opens a new service to London with good connections to the US market. The route starts according to plan in mid-September and will complement NCL’s existing route network from Western Norway and Northern Norway towards Hamburg and Rotterdam.

NCL’s concept is to transport fresh salmon from Stord to the English market and return with imported goods to Western Norway. The plan is to operate with weekly services.

Efficient transit time to both the English and American market

The service will depart from Stord on Monday with arrival in London on Wednesday night. Agreements and useful connections are established with London Heathrow Airport to enable the delivery of fish in the USA as early as Thursday. The service meets the market demand for fresh airborne fish for the American restaurant industry.

We start sailing to London. The new service opens at the beginning of September.
Business Development Manager at NCL, Martin Torkelsen

The Norwegian Coastal Administration supports the new service between Stord and London.

In connection with the Norwegian Coastal Administration’s subsidy for transferring goods from road to sea, NCL received 25 MNOK to establish a salmon route between Stord and London. The Subsidies shall contribute to the transfer of goods by supporting the establishment of new Shortsea services providing the cargo owner with concrete alternatives to road transport.

The service to London will mainly be a round trip to the Norwegian coast. Still, it is conceivable that the service will occasionally call at Rotterdam and Hamburg on a round trip.
Business Development Manager at NCL, Martin Torkelsen

Norway exported 2.7 million tonnes of seafood for NOK 107.3 billion in 2019, a volume reduction of 3 percent, an increase in the value of 8 percent. The increase corresponds to 36 million meals every day, all year round, or 25,000 meals per minute.